Born in New Orleans in 1903, Walter Inglis Anderson spent most of his life on Mississippi’s Gulf Coast, enthralled with the area’s natural wonders. He spent countless hours observing and capturing the flora and fauna of the region through his paintings and drawings. Anderson would frequently visit the undeveloped regions of Mississippi, particularly the barrier islands for close encounters with nature and weather. He took a special interest in Horn Island where he spent days on end observing the natural beauty around him, creating a multitude of artworks.

Anderson was uninhibited by harsh weather and water currents. He delighted in the changing seasons and welcomed stormy days because it gave him more opportunity to observe how birds and wildlife behaved. His fascination with nature and his talent as an artist led him to become one of the most iconic artists of the Gulf Coast. His block prints, ceramics, and watercolors are revered as historical representations of the natural world along the Gulf Coast. He is credited as being an integral figure in the Arts and Crafts and American Contemporary Art Movements.

Though born and raised in the south, Anderson went on to attend the Parsons School for Art and Design and the Pennsylvania Academy of Fine Arts. He grew up with a mother who schooled him in art, history, and literature and had taken a special interest in those fields. Upon his time traveling abroad in France and Spain, Anderson visited two locations that forever impacted his approach to art: the cave complex of Les Eyzies and the grand cave paintings covering the walls, and Chartres Cathedral with enormous stained glass windows. The cave paintings and stained glass inspired Anderson to express himself through mural painting.

As a young adult, Anderson had a business with his two brothers at Shearwater Pottery, opened by Peter Anderson in 1928. Brothers Walter and Mac decorated pottery that had been created by Peter. This work continued for Walter Anderson until he was diagnosed with a severe mental illness in 1937 and spent much time in hospitals around the NE U.S. and in Mississippi. It wasn’t until he moved with his wife and children to his wife’s family home in Gautier that he became prolific in his art. He began to draw inspiration from his children and their fondness for fairy tales. Anderson produced block prints, illustrations, and more.

A decade later, Anderson returned with his family to his family’s Shearwater compound in Ocean Springs. Anderson spent most of his time in a small cottage, isolating himself from everyone, and still making his trips to Horn Island. It is said that Horn Island gave him peace and serenity, surrounded by nature, where he could paint and draw some of his favorite pieces.

Anderson passed away in 1965, the same year he made his final trip to Horn Island. He is considered a visionary artist and is widely celebrated nation-wide. 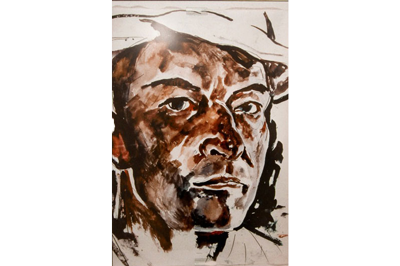